Animal Communication and Anxiety: how a chat and a holistic approach helps. 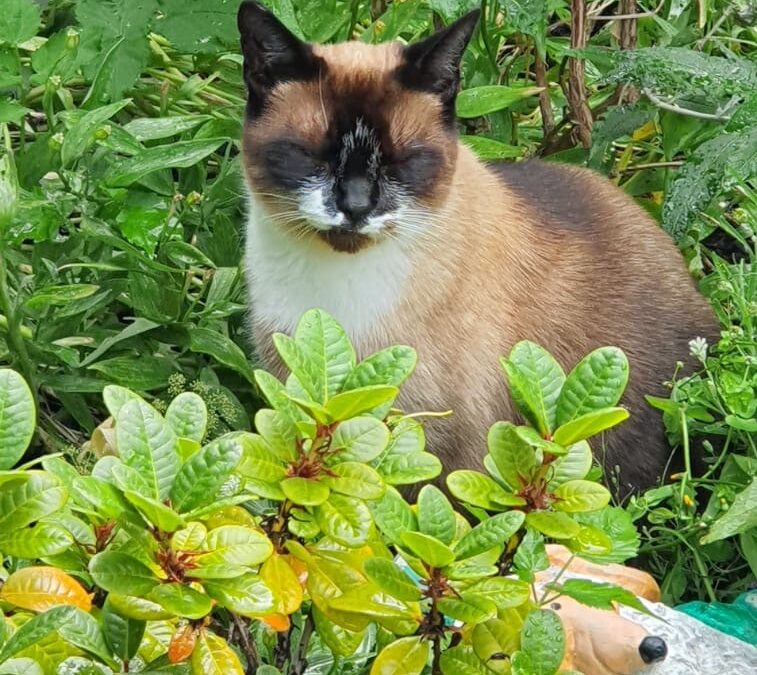 They had rescued a Snowshoe Pussycat, and they were having a lot of problems with handling him, due to his fear and anxiety around people he just hid most of the time.

Having rescued lots of cats over the years, they really felt that they were not giving him the best possible home because he spent most of his time hiding and only really came out at night. He was withdrawn and on edge, and really not making the most of his new life in his new home.

When I went to visit I kept my distance, and joined the family sitting around the fire in the sitting room. Blue appeared in the doorway to inspect me and seeing that I didn’t want rush up to greet him or try and approach him. He relaxed and maintained his distance, whilst in sight.

I communicated with Blue, and he was able to share with me that he knew I was here and he had a tight throat. He felt anxious and his heart was racing as there were lots of people there.

He shared with me, he really wished that his family could explain to him a lot more about what was going on in the home.

What became apparent is that Blue would really benefit from eating a no grain diet. Grains can cause ‘heat’ in the body, based on traditional Chinese medicine principles. And this can trigger anxiety or make it a lot worse.

Blue also shared he wanted help to avoid snacking and grazing through the day. This is very insightful because cats generally would go and catch something, eat it, and have a snooze.

Cats wouldn’t catch 15 mice and lay them out for, just in case they’re hungry later on. So, leaving biscuits down for them to graze on all day doesn’t actually help replicate a natural way to eat, especially if they’re prone to being a bit greedy or in the past have gone without or been very hungry. Though he did share with us that he liked to snap all down, human food and eat it really quickly!

He said he really doesn’t feel safe and that takes a little while for him to feel safe before fully let go. He loves to go out on the hunt, be groomed and brushed.

That he likes to be indoors when it’s quiet, he shared with us that he would like to be more confident so that he can demand more cuddles and attention! He likes best of all the indoors where it’s nice and safe, and the outdoors for hunting.

He shared he didn’t like the rain, being cornered, feeling trapped, big changes, loud or sudden noises or sticky whiskers.

Blue also shared that he’d been moved around, and he’d had to move, because he lost his family and his friends which didn’t help him to grow in confidence.

He said his life was very difficult before he came to this home. It felt very difficult, up and down, scary, with lots of heartache. And he said, “I just kept repeating the same mistakes which meant I kept going back to noise” The noisy place he referenced is the cat rescue he came from.

He was traumatized in his first home and heartbroken as his person died. He never learned to cope with that noise and Blue shut down and stopped eating with so many cats in rescue. He was lucky to find a quiet and caring home.

He shared with us his role was to teach patience and understanding, to be a different type of cat to experience and to receive love without attachment.

He shared with us that he likes Ma’am, to refer to his family members as ma’am and, number one. He went on to say “I can’t say mum, I had a human mum and that went wrong she died. So, I’ll say, ma’am. For the lovely kind lady here, and her son, he’s number one.”

He wanted to live his life to the fullest and enjoy now, and the future. This was promising for us as it meant that he was optimistic and had hope.

He shared with his family that he thought it was important that they have fun and laugh as much as possible, and be present in the moment.

He said he didn’t like visitors it meant bad things, but that he would slowly build up his confidence. If they would support him going at his own pace and telling him who was coming into the home and what to expect.

He shared that he’d love to play with his family, more.

Blue also had some questions for us, he wanted to know why strangers came, and what on earth was the doorbell about. He shared with me it was like an electric shock for him when it went off.

He explained that sometimes he feels anxious and it helps him to feel better when he has catnip, he told us catnip would be helpful for resolving this, as would play. Which is a wonderful tonic for feeling anxious, not just for cats but for dogs and us humans too?

He wanted reassurance that this was his forever family as he felt very rejected having to go back to the cat rescue again.

Blue shared it was very insightful to have a session like this, and asked me to “please share that I appreciate every kindness, and every gesture. I like it being just me and I’m grateful for the love that I receive.”

The updates I hear from Ma’am and No1 are that since our session, Blue has significantly come out of his shell, is much more relaxed and living his life more fully. Blue now comes out for his cologne as they’ve nicknamed his custom bach flower remedy, and he gets a new bottle every month, sent to him in the post.

What a lucky boy, living out his life, loved and loving a family. What more could a cat ask for?

If you are looking after an anxious cat or any anxious animal I can help.  Let’s have a chat (on the house) to explore working together, book your call here.

I look forward to chatting soon, from the heart, Ruthy xx