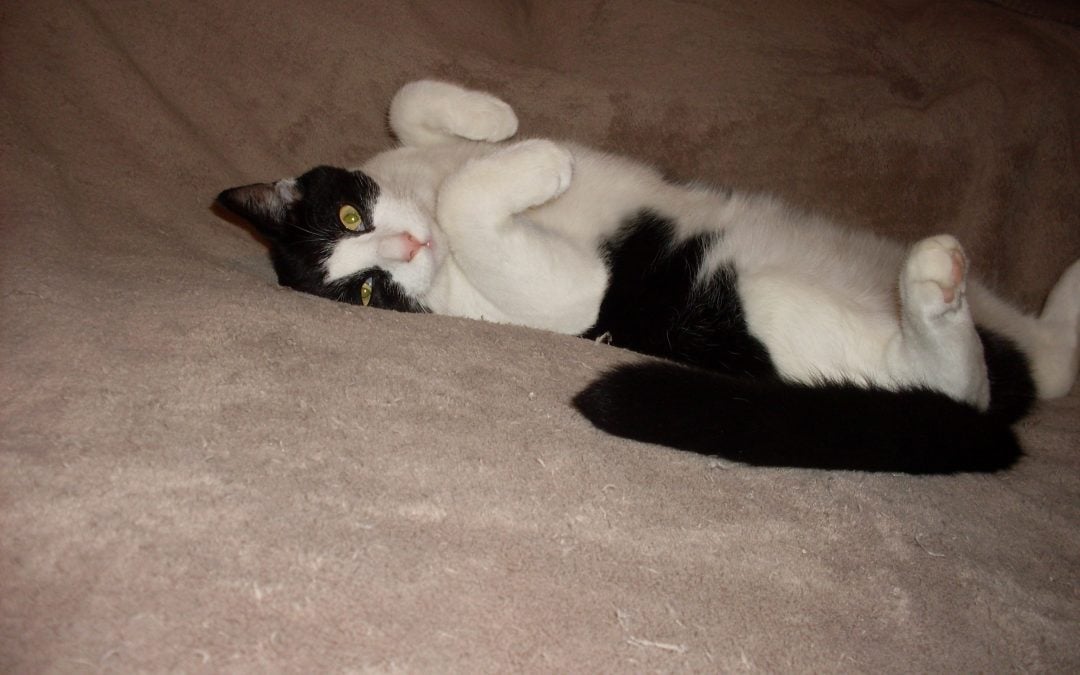 This is a record of an animal communication for cat amputation, and was so insightful for all of the family.  It is written by one of my clients, Susan Eggleton and is her account of an animal communication session I had with her and husband Allen and her two rescue Tuxedo cats, Sophie and Bobby.  He had an amputation after an incident with a dog, despite Bobby losing a leg, he chose thriving at life!  Read his incredible story in this post below. 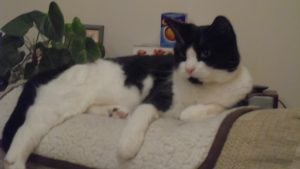 A Different Kind of Animal Communication

In early June 2018, Ruth Bradshaw, who I would describe as a light worker and animal communicator, visited us to conduct a communication session between our two cats, Sophie and Bobby.  Ruth has featured several times in the media on TV and radio talking about a vast array of spiritual work she is involved in, describing herself as an ‘earth angel’ and how some people may possess angelic elements.  She featured on ‘This Morning’ with Holly Willoughby and Phillip Schofield earlier in 2018.  Ruth uses the name ‘Ruthy Doolittle’ to conduct her animal communication business.  With her reddish gold hair, pale complexion and peaceful aura, it’s easy to see her as an earth angel.

I thoroughly enjoyed our afternoon which was insightful, at times revealing and funny, but often deeply moving.  I especially wanted Ruth to connect with Bobby after his horrendous experience in 2017 when he was attacked by, I suspected, a dog, and as a result lost one of his hind legs.  I wanted to find out more about what actually happened.  Ruth’s revelations confirmed my suspicions.

Ruth’s questions are represented with the letter R in bold italics and our cats’ responses in non-italics numbered B (for Bobby) and S (Sophie). 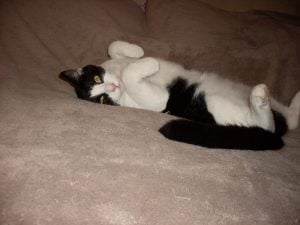 Bobby’s interactions were an absolute revelation; charming and sometimes touchingly beautiful.  Other times, his reflections on life were so quirky and funny, with a characteristically tough maverick edge that, once or twice, Ruth was in fits of giggles.  She explained a little about Bobby’s personality.  She said he prefers to watch, especially in the sun beams.  This is true as he always lies in the sun even if it’s coming though the patio doors – he will be stretched out on the carpet revelling in it.

He feels very wary (little wonder about that!).  Ruth described Bobby as a ‘super sweet soul’ and wants to be more relaxed.  To help him, Ruth mixed up a Bach flower remedy for me to add to his food.  Bobby knows that he is six years old (I didn’t tell Ruth this beforehand) and loves the colour yellow.

Ruth added that Bobby is an old soul in a young body and has also shared a past life with Nigel.  We are all intrinsically linked.  He has quite a broad masculine voice. Both our cats understand what we say and think and we need to be mindful that they will know.  All the time Bobby communicates.  I know it but don’t always trust it.  When he pops into my head, perhaps when I’m out, Bobby is communicating.  When I feel his eyes he is communicating with me and he wants me to sense purring in my ear.

When we go on holiday we must tell the cats that there will be three full moons, for instance, until we go away and it will be for seven sunrises.  When we go away we must explain more and it is better for someone to visit to look after them.  Bobby said he doesn’t want any cages, no travel and no new routine.  Someone can visit or stay.

More from Bobby the cat.

Ruth explained that Bobby connects with many different dimensional beings and sees a lot more than us, visitors and friends.  His soul is old, his body young.  He said that Sootie is about. Do we know Tigger or Stripes?  Dolly also visits us but not all the time.

On a lighter note, I asked Ruth to ask Bobby why he never wants to play with the cat toys we have in our living room when Sophie does.

Ruth laughed, as he put a real emphasis on ‘very silly!’

Well, we’ll see what Sophie thinks now after that!

Ruth then spent some time with Sophie 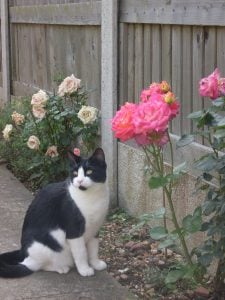 Ruth went upstairs to sit on the bed to talk to Sophie but was then told by Sophie, “That’s my bed!”  I heard Ruth say, “Oh, it’s your bed, okay”.  So Ruth sat on the floor!

Ruth told me that Sophie didn’t sound exactly snobbish but has a certain upper crust tone to her voice.  I can imagine this as she is quite haughty and proud.  Sophie’s favourite colour is pink. “It must be pink”, she said to Ruth.  This is true as she loves to sleep on pink blankets and towels; in fact if Bobby is there she sometimes tries to push him off!

First Impressions of Sophie the cat.

Ruth had a sudden flash of Sophie being cornered and pinned, with lots of fear.  This was very traumatic for me but I wasn’t surprised.  I had consulted a psychic before about Sophie who told me that during the first months of her life she lived with her mother and siblings in a rough household where the children treated the kittens like toys and would throw them around.  She had enough, left and ended up in Harlow Town Park where someone alerted the RSPCA who took her into foster care.  As a result, Sophie does not suffer fools gladly.

There were some dogs yapping in a neighbouring garden during Sophie’s communication.  Ruth asked how she felt about them.  Sophie sighed and behaved like she had no tolerance whatsoever.

On a final note, she said to Ruth:  You’re a funny soul, an unusual human!  It was probably unusual for my cats to find someone that can speak to them and understand them!

Final Feedback from me.

I so enjoyed getting to know Ruth and her visit to us and feel we have much in common, particularly where animals are concerned.  We both recognise them as sentient beings, much like humans and, in many ways, more knowing, intelligent and spiritual than people.  In conversation, Ruth said to me that other people

don’t always think like us where animals are concerned.

I feel that Ruth’s communication opened up a whole new world for me and has definitely helped me move forward since Bobby’s attack which was why I invited her round in the first place as I wanted to see how Bobby was coping and get to the bottom of things a little.

It appeared to me that he has been coping better than us!   I felt relieved that he felt this way but honour what he said and am sure we will all move forward together in the future.

If you feel you would benefit from a catchat or animal communication session then please do book a complimentary call and cuppa with Ruth (on the phone) here.

As the writer, I Susan Eggleton would be delighted to hear from you if you want to get in touch with, please drop me an email susaneggleton@live.co.uk here.