Cat Love: Adoption… A Short Story by a Short Adoptee 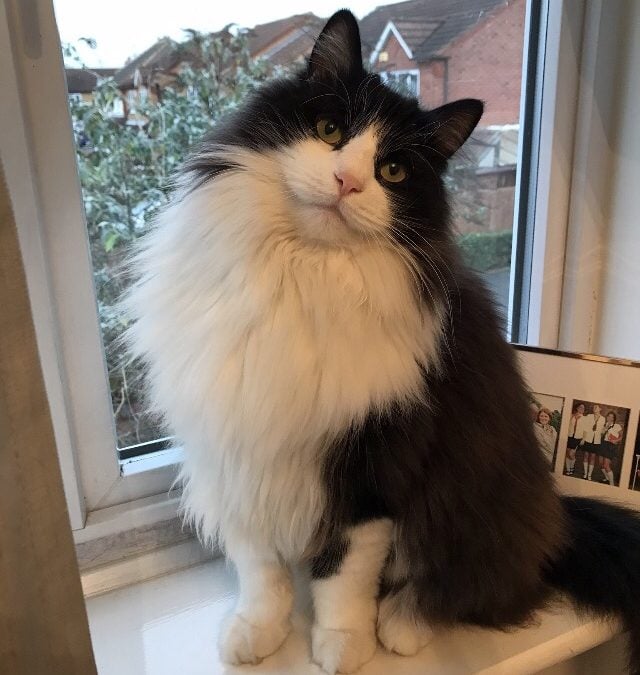 A heartwarming cat chat from the delightful Aramis, written by Agnes J Freeman. Aramis is a rescue animal big on his new human’s cat bond with him and his brother Arty. If you love animal communication, you’ll love this story, full of animal healing and insights through the eyes of rescue cats.

About the author: Born in Yorkshire, Agnes J Freeman is a new writer. With a degree in Business Studies, Agnes finally escaped from the corporate world and runs her own company helping people find their dream job, all from the comfort of her own home. In her spare time she does the usual cliche activities such as reading, travelling, enjoying good food and wine, and surrounding herself with family & friends, as well as her 2 cats. After being told repeatedly “you should write a book” by friends who would laugh a lot at the way she told a story, Agnes felt inspired to become a writer so she, and her readers can escape into a world that is slightly less manic than the reality that we all live in today. 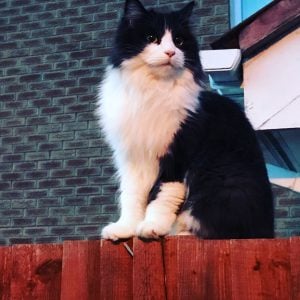 My place of birth, foster care, then my adoptive home, what a journey I’ve been on and all at such a young age. I’m not even a year old and I think if I could put my thoughts into words,this would be how I feel. I’m only little so if I get my words a bit muddled up then I’m sorry but if you could see me, you’d forgive me as my Mummy says I can get away with a bit more because I’m gorgeous, but however gorgeous I am, I always needs manners, that’s what Mummy says. So here is my story so far, please would you like to read it and thank you for enjoying it. (Just practicing my manners!)

I’ve had a tough time, well since I was born earlier this year I think I have. A steep learning curve, quite a bit of upheaval but I’ve had some adventures, I’ve had fun and I’ve had times when I’ve wanted to cry, but because I’m so little I have no idea if I have actually cried, and I certainly have no idea if anyone noticed. If they did, they didn’t seem to show it. Except for my brother, he’s younger than me, only by a few minutes but I like to think that I’m the bossand in fairness, I have been until recently. I took all the changes in my stride but he seemedto struggle to start off with. But now we’ve been in our forever home for a while, recently he’s seems much happier & more content than I am and I might need to pull my little white socks up to keep up with him. 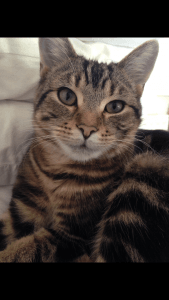 So let me talk about my brother for a little while. We’re not identical twins so people can easily tell us apart, which is one less thing for us to worry about. He has the prettiest eyes, or so our Mummy keeps telling him. Even the people who looked after us when we were in care said the same. He’s a little bit smaller than me but boy can he eat. I’ve not seen anyone in my short life eat as much as he does. And he eats so quickly, I’ve just started to taste the mush that I’m eating. Is it meat or fish? Have we had it before? Do I like it? And by the time I’ve played around with my food, my brother has finished his. How? I didn’t even know it was possible to eat that quickly. He then looks at me with his “pretty eyes” as if he’s going to stealmy food from me. Thankfully Mummy never allows that to happen, except if she’s looking theother way for a split second. But I love my brother, he’s been at my side the entire time and when we were in care, we used to sleep right next to each other. We did it mostly becausethere just wasn’t the space but also because I think we both felt safe together.

I guess we’re like Musketeers, we can take on the world as long as we have each other. Because of the tricky start we’ve had, we’ve had times when we’ve not been too well and our Mummy has had to take us to get looked at by a man who has objects I don’t like. Plus we have to sit in a waiting room with other patients before we are seen to. It’s noisy there so I stay close to my Mum and brother. The man explains what he’s doing to us and uses words such as “stethoscope” and “injection”, neither of which I like very much. He explains to our Mummy that if we take the medicine we’ll get better. And you know what? Our Mummy prepares new food, gives us the medicine, mops up our sick, clears away our diarrhoea, stays awake with usat night time and we’ve got better. I feel good for the first time, and I’m sure my brother does too. We have so much more energy which means we can play more, yay! That’s why I think our “forever mummy” is pretty nice. She does what she says, she doesn’t shout or get angry at us at all, she buys us new toys, plays patiently with us, let’s us rest and sleep when we need to, she tells us she loves us so many times every day and we’ve got a new routine. For once in our little lives, we feel safe, secure and happy.

But it wasn’t like that to start off with. When we first came home, we were petrified, a whole new world of smells, noises, toys, so much for us both to take in. And I think our new Mummy had a shock too. I once saw tears trickle down her face and her usually happy smile had disappeared. And she was once talking to someone saying she had no idea it would be this tough and had she made a huge mistake? I wasn’t too bothered to be honest, we’d only been there a little while and we half expected that she wouldn’t love us as no-one else had yet, why would she be any different? I don’t know what the odds are of siblings being adopted together but what I do know is it takes time, and the longer two siblings are in care, the more difficult it would be to adapt to another “new home”. There is a lot of talk about developing emotional attachment in adoption cases, only now do I know what that means. Everyone wants the new-born and I am a twin who is a couple of months old. Slowly though and as each time we had a sleep or a nap, we’d wake up and our Mummy would be there smiling, the waterfall on her face gone and the black stuff she had on her eyes wasn’t running down the face quite as much as it used to. 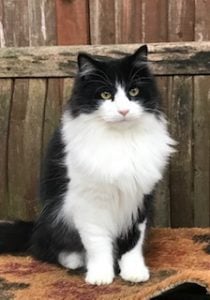 Now for a little bit about me. Well I’ve not been told that I have pretty eyes but Mummy calls me handsome. What does that even mean? And when my Mummy looks at me she says I have the grandest name. She said it was important that we kept the names we were given at birth but we’ve taken her surname which means we’re family. I like my new Mummy, I think she looks different from what my first Mummy looked like, this new Mummy has less hair and is much bigger, and she’s still here which is more than can be said for my birth mother. I have no idea how long we’ve been living with her. I believe that you can work out days based on how many times you go to bed but I can fall asleep a couple of times a day as well as at night so that confuses me. We have family that don’t live with us but we know they love us, grandparents who we’ve met and always ask after us. And my brother & I have to pose for photographs so she can send the photos to people. “Smile” she says as she points this black thing that sometimes shows a big bright light which makes our eyes go funny. We’ve been in Mummy’s car a few times, it looks very nice but I don’t really like being in it. It means I can’t be right next to my brother as we have to sit separately so we can travel safely. I much prefer staying at home and recently we’ve been allowed out to play in the garden.

I can see trees, plants, so many leaves, I’m so excited I can’t hide it. And each day, the leaves are changing colour. They used to be green but now some are a rusty yellow colour and as the wind blows, the leaves gently fall to the ground which looks amazing, it would be so much fun to be a leaf. As we’re only little, we’re not allowed out of the garden but I can’t wait until I’m old enough to go through the gate at the bottom of the garden path, or to climb trees and go on adventures. So much to look forward to, who knew when we were taken into care this whole world of excitement was out there? 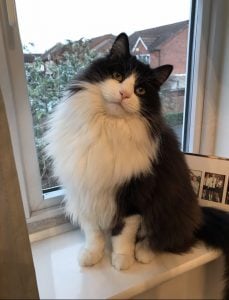 So that’s my short story so far. And I’d like to dedicate this to two people, my Mummy and to someone she calls Auntie Jenny. When I secretly listen to Mummy on the phone, she talks about Auntie Jenny who has given her so much support, advice & guidance and couldn’t have gone on this journey without her. I don’t know what the journey is as I always thought going on a journey involved going somewhere. Maybe she means in the red car we go in to see the man with the stethoscope and injections? But I think he’s a doctor, and that’s not much of a journey is it? And one day Mummy said that Auntie Jenny was delighted with the flowers my brother & I had sent her as a thank you. But seriously Mummy…….how on earth did we afford them as we don’t get pocket money? And how did we manage to hold a pen between our paws? 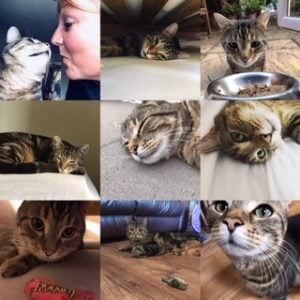 So thank you Mummy for taking D’Artagnan and myself, “Handsome Aramis” home with youfrom the cat home. I know we don’t tell you often enough that we love you, well not as much as you tell us, but when I purr uncontrollably and Arty lays down, blinking at you, he’s really smiling and telling you how happy he is. And even though we think you’re a little bit crazy, when you saw us in the tiny cage and all I could do was hiss, and Arty couldn’t even betouched, we’re so happy you judged us on our cuteness and in that moment, you knew thatyou’d found your twin boys to complete your family.