Honey and Sally shared more than one past life testimonial 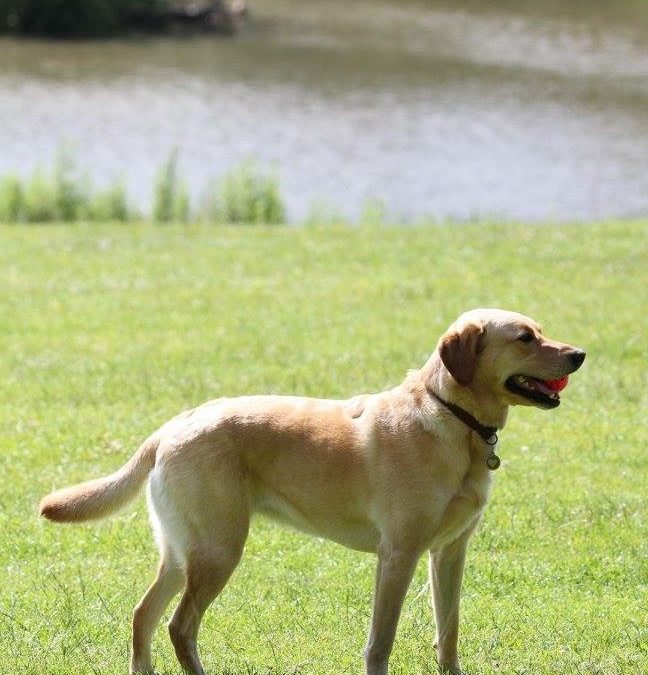 Honey and Sally shared more than one past life testimonial.

She went on to explain that she had been to see a vet about Honey-Blossom and her stiffness, but did not feel aligned with their suggested treatment. Sally had been an energy worker for over 30 years and was certain there was something else that could help get to the root cause of all these strange aches and pains.

After talking about the process that I would use as an energy healer, animal communicator and transformational energy coach, we arranged an appointment.

When I arrived, I met a gorgeous dog and her lovely human. Honey-Blossom had quite a limp was very, very stiff in her backend, and her energy was quite heavy. She didn’t flow when she moved; it was much more of an effort for her. 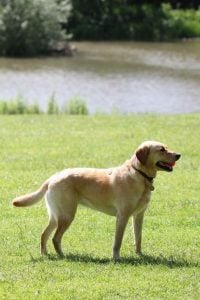 We did some energy work with Honey-Blossom first and found that we had to release some stuck energy using EAM (Energy Alignment Method), one of the energy healing techniques I use, which is super easy to learn and use at home.  What struck Sally and I was just how much Honey-Blossom was drawn to my energy – she requested Reiki before I’d even tuned into her energy.  Honey-Blossom came back to me several times during our first session to take more Reiki from me, specifically positioning herself exactly where she needed it during our session, rolling and stretching all over the floor getting into exactly the right spot to release all the resistant energy in her body.  It was quite fascinating, Sally observed that she was moving in ways she had never seen her do so before.

One of the questions Sally wanted me to ask me about while we were working together, was why Honey-Blossom would sometimes jump off the sofa and bark at the door, as if somebody was there to bark at.

While I was there, synchronicity struck. First, the postman came to the door and Honey-Blossom didn’t bat an eyelid, then, shortly afterwards, she lurched off the sofa charging to the front door as if something bad was there. What great timing! I asked Honey-Blossom to ‘show me’ what she could see, she was surprised that I couldn’t ‘see it’ as she could.  She ‘showed me’ a movie clip, fuzzy and see-through of a Victorian couple who were dragging a boat behind them from the river and she gave me the feeling that they absolutely must not come any closer and they were not welcome. Honey-Blossom had to protect the home.

It became clear to me that what Honey-Blossom was seeing were spirits, which is why her human, Sally, was unable to explain the mad outbursts of barking.  Sally explained that she often helped spirits move on and that was an easy exercise for her to handle. Phew!

After exploring what was going on for Honey-Blossom, it transpired that her and Sally had been together in many past lives, they had been companions and healers and had been persecuted many times in previous lives for their work.

When I came to work with Sally, the energy had already changed from what Honey-Blossom and I had worked on. We had a few items to work through which included ­not wanting any more work, acceptance of her intuitive gifts and how to share them with others, and having felt a bit tired and weary with heaviness in her knees.

Once we had worked on getting Sally’s energy into a very good place, we were able to work efficiently through the resistant energy, and all the while Honey-blossom remained in the room with us.  Sally’s energy transformed to thousands of belly laughs, a lot more positivity, and much lighter energy amongst other high vibrational mantras to align to.

There was a mutual fear around stepping up and out as in previous lifetimes, they were persecuted for being ‘witches’ or other such nonsense. I helped both Honey-Blossom and Sally to release this energy and create fantastic new energy.  Shortly after our session Sally emailed me to say she felt a big shift, and not only was her dog more energetic than ever before, she had no limp or stiffness.

Two weeks later when I went for a follow up visit, I was overjoyed to be welcomed by Honey-Blossom, running to the door to greet me with no limp or stiffness.  The smile on Sally’s face said it all really.

I asked her how she felt in herself. Sally firstly explained that she’d chatted to other dog walkers in the area about the unwelcome visitors and many concurred that their dogs had previously got spooked in the area outside her house.

Then she explained there was a little residual energy to work on around her late mother, which we did using the sway from EAM.  We identified and worked through the items as they came up one by one – Honey-Blossom even came for a quick reiki session herself although much, much shorter than before.

I left them both relaxing with some slight tweaks to be made to Honey-Blossoms diet to support her body with more “cooling” foods, which (according to Traditional Chinese Medicine) work better with animals with inflammatory conditions such as arthritis, along with some suggestions to play certain games with Honey-Blossom.

A few weeks, Sally called to tell me about some positive side-effects that came from our work together. Not only was Honey-Blossom a happier and much more energetic dog, she herself had received more work that she loves the most from wonderful clients. 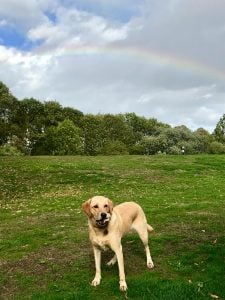 “Ruth, thank you so much for the links, I played the game just now with Honey, she searched for 5 minutes and came in and went to sleep, Honey is walking well and back to her lively self, I’m so glad to have met you. It was a huge bonus to have freed up my work flow, I am now busy doing work that flows and feels natural for me, so can hardly call it work! My knees feel fine now, had forgotten all about them actually.

Also since our sessions I have heard Honey talk twice. Not the usual telepathic chat but it was like an adult human standing next to me. I heard her rather than read her if you know what I mean. The first time she said ‘In’ and questioned what she meant, correcting her by saying ‘you want to go out?’ But no she meant in the kitchen as two people she loved to be with had shut her out while eating pizza.

The second time I handed her a bone and heard ‘Thank you’ SO loudly there was no denying it. I was stunned. Had she always said it?  I have understood what other animals have communicated before but this was different. Anyway another amazing bonus!

I am much more able to hear her wants and desires now without questioning it. Just knowing and feeling it naturally which helps.

Generally I feel closer to her, our bond is better and we have more fun together.  It was such a relief to work through this without going down the medical route.  I am also loving using the sway clearing.”

If this resonates with you I would love to hear from you, leave your comments below or get in touch through my contact form here.